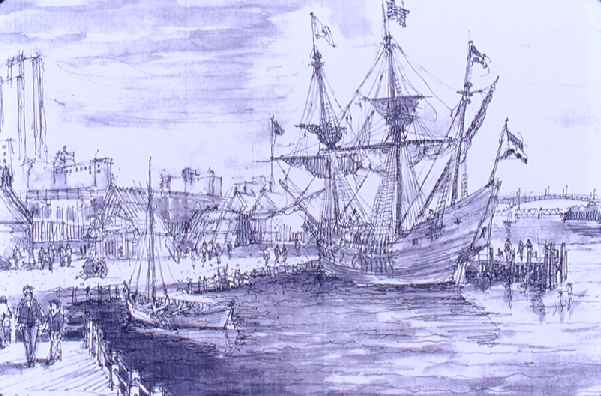 Working with New York Governor George Pataki and Albany Mayor Jerry Jennings, the New Netherland Museum, owner of the replica ship Half Moon, has proposed a concept to develop a Living History Museum of the original Dutch settlement in the Capital District. This Living History site would be located on the Albany waterfront near the Port of Albany. Included at the site would be a re-creation of the original Fort Orange, a shipyard, typical trades and structures (blacksmith shop, brewery, bakery, alms house, and residences), Native American dwellings, croplands and pastures with livestock, and related museum structures. In addition, appropriate presentation of the archaeological treasures from 17th Century Albany could be consolidated for display in one location. Permanent berthing for the Half Moon would permit visitation through an extended period of the year, and opportunities for dockage of visiting historical tall ships.

The planning timeline for this project is important. The year 2009 is the 400th anniversary of the original voyage by Henry Hudson for the Dutch East India Company. It was during this voyage that Hudson became the first European to explore the Hudson River and describe the richness of natural resources and opportunities for trade in this area. Within five years, traders from the Netherlands established Ft. Nassau near the present Port of Albany, thus starting the settlement that became present day Albany. As such, Albany is the oldest continuously occupied city in the original thirteen colonies.

With a $300,000 grant from Governor Pataki and working through the Albany Local Development Corporation, Lord Associates, one of the top museum design firms in the world, has begun preparation of an economic feasibility study of the proposed concept. Due for completion in the fall of 2001, this report will describe the economic benefits and costs associated with the implementation and long-term operation of this proposed attraction.

Please follow this web site to keep abreast of developments with this project, and to be informed of public meetings and planning sessions. Or better yet, pay a visit to the Half Moon while it is docked in Albany during the Spring or Fall (check the schedule button on the left).